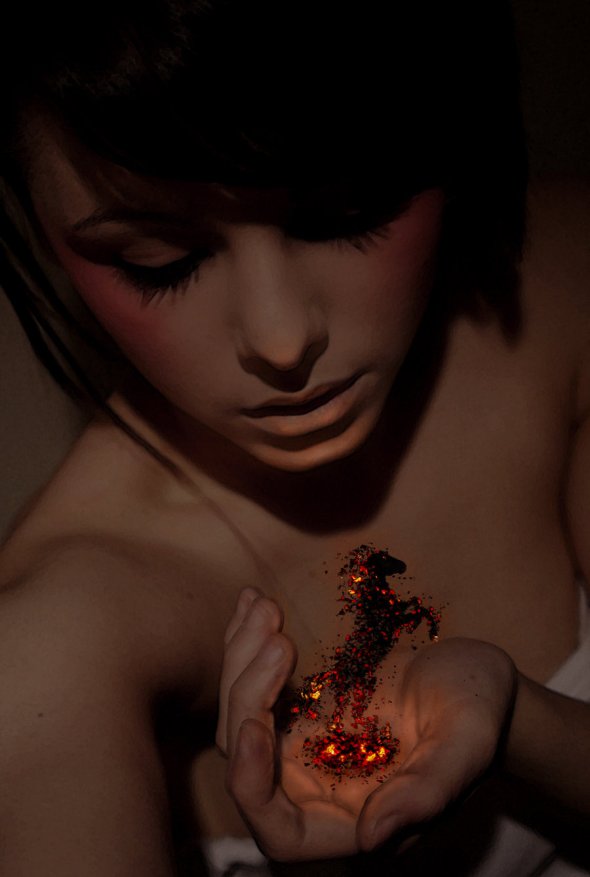 Through all the moons of many a year, the Fire Horse is a dynamic creature, with a vigor that promises youth and freshness until the very end of life. The will and the spirit of the Fire Horse cannot be broken. This Horse goes through life with philosophical patience and the ability to bounce back from adversity no matter how dire the circumstances. In times of solitude, Fire Horses also have an i…nsatiable need for intellectual stimulation and they satisfy their curiosity for learning through reading, listening, conversing, and travel abroad. Fire Horses make inspiring leaders, revered and respected. They encourage their subordinates with kindness and just the right degree of strictness and work well with people in all stations of life. Financial rewards fall in the middle ground, not too bad, not terrific, but always comfortable. Being in love with the Fire Horse brings pure rapture. These noble Horses are generous with their love, with hugs and kisses. Loved ones always know where they stand because Fire Horses demonstrate every day through their actions the love they feel deep within. Each day is a soft and tender love poem

Be careful what you dream for…

Oh, rabbit on the moon,
What are you leaping for?
I shall leap, I shall leap soon
At the large full moon!

Taiwanese designer hsia-ying lin has worked together with craft artisan jun-ching tang on
‘moon rabbit’ cup and plate. made from black clay, these tableware pieces interpret the famous
chinese fairytale of the rabbit on the moon, commemorated every autumn in taiwan during
the moon festival celebrations. lin and tang have designed a cup in which the rabbit sips
the water within along the lip of the vessel; and a plate where a rabbit is found sitting on its edge,
its stretched ‘reflection’ becoming the dish itself.

Grandpa Rabbit, or “Tu Yer” in Chinese, is a clay rabbit figurine said to be modeled after the legendary Jade Rabbit pounding medicine on the moon. It’s an age-old folk toy and a mascot in Beijing.

According to legend, once, a plague wrecked havoc on the city of Beijing. Almost every family was affected and nothing seemed effective in curing the disease. Seeing that people in the human world were desperately praying for treatment, Goddess Chang’e on the moon felt really sad. She sent Jade Rabbit to the moral world on a mission to drive the plague away. When she arrived in the City of Beijing, the Jade Rabbit visited one family after another, curing a lot of people.

In return for her kindness, people recovered from the disease vied with each other in giving her some gifts, but Jade Rabbit declined them all. Instead, she borrowed some clothes to wear. As a result, wherever she went, she changed her clothes. Sometimes, she dressed like a man and sometimes a woman. Her mission took her to all parts of Beijing. After driving the plague away, Jade Rabbit returned to the moon, leaving a beautiful memory in the hearts of Beijing people. To commemorate Jade Rabbit, local people made clay figurines of her. On the 15th day of every lunar August, every family would worship Jade Rabbit by presenting juicy melons, fruits and delicious vegetables and beans as a way of showing thanks to her for the happiness and auspiciousness she brought to the human world. Jade Rabbit was affectionately called “Grandpa Rabbit” or “Grandma Rabbit”.

Legends aside, the emergence of Grandpa Rabbit actually originated from the worship of the Moon Goddess and the firm belief in mythology. The legends about the moon also played an important role. The mythical tale about a rabbit on the moon first appeared in the Sping and Autumn Period. Among the general public, the rule of “woman worshiping the Moon Goddess and men worshiping the Kitchen God” were widely followed. So, the moon-worshipping rituals were mostly carried out by women. Children are fond of mimicking their mother, and that’s where the image of Grandpa Rabbit designed for children’s mock rituals came in. After buying a Grandpa Rabbit home, kids would perform the ritual like adults. Among the Yangliuqing woodblock New Year paintings created during Qianlong Period of the Qing Dynasty, there was a painting entitled the Moon Rising above Laurel Trees, bringing to life the scene of kids worshipping Grandpa Rabbit.

Since Grandpa Rabbit were exclusively used by kids, it naturally functioned more or less like a toy. After the worshiping ritual, Grandpa Rabbit became a toy for children. To add more fun, Grandpa Rabbit figurines with strings to move the arms were created. At the same time, there were a host of other rabbit toys hitting the market, such as “Rabbit Mountain”, a toy featuring a rock mountain and a group of rabbits in various postures holding different musical instruments, as if playing music at a grand ceremony. Another interesting toy was a movable small rabbit. Due to the spring fitted to the bottom, the rabbit swings and shakes hard when slightly touched, giving a lot of fun. What’s also worth mentioning was “Grandma Rabbit”, presumably the “wife” of Grandpa Rabbit. It’s a figurine of an old lady and was put alongside Grandpa Rabbit for worshipping. In Jinan of Shandong, there was a popular toy called “Rabbit King”. It’s a clay figurine of a rabbit head and a human body in the posture of pounding medicine, with both arms holding the pestle.

No traditions for me….

I am not religous and dont like to stick too much to traditions….so f**k the usual colored eggs this year and here is a recipe that I got taught when I was training as a chinese chef… 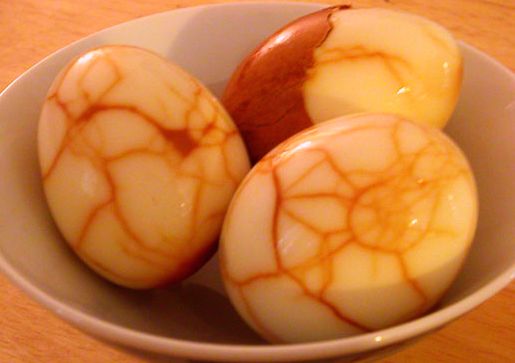 1. Hard-boil eggs in water. Allow to cool.
2. Combine all the rest of the ingredients and bring to a boil.
3. Once eggs are cool enough to handle, gently but firmly crack the shells until you have many little cracks all over the shell. Do not remove shell.
4. Place cracked, hard-boiled eggs into the liquid and simmer at low heat for half an hour.
5. Turn off heat and allow eggs to cool down , keep the eggs in the liquid overnight in the refrigerator. The longer they steep the darker the color and the stronger the flavor.
6. When ready to eat, remove eggs from the braising liquid and carefully remove eggshells. 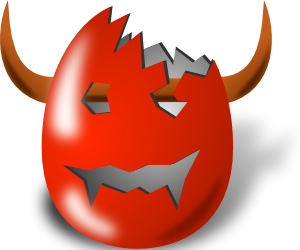 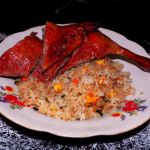 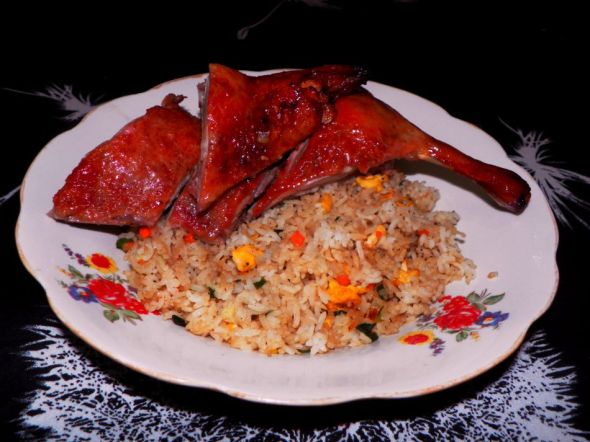 photo by me here

Preparation:
Clean the duck well. Remove the wing tips and the lumps of fat from inside the vent. Stick a straw or the hose of a airpump onder the skin by the neck opening breast side up and blow air under the skin ..the skin should balloon up…thats to get a crispy skin later.

Mix all the ingredients ” A “ together and massage hard into the duck cavity make sure you cover the entire cavity,(yes your hands and forearms will be covered), then take a metal skewer and starting at the bottom of the cavity(anus) start threading the cavity closed at the end push the point of the skewer underneath the breastbone.
Now use the special meathooks(availble in chinese supermarkets) and insert the hooks in the armpits of the duck..or tie a long piece of string under the wings keeping enough length to hang the duck later.

Now mix ingredients ” B ” in a large pot and bring to a boil. Then take off and leave to cool.In the mean time bring another large pot with water to the boil.

Submerge the duck into the boiling water for about one minute making sure all sides are touched by the water(this tightens the skin for crispy skin later too ).then take out and run under very cold water for a minute or two.
Hang in a dry windy place for a few hours make sure you have a dripping tray placed underneath the duck.
Then reheat the mixture ” B ” hold the duck above the boiling mixture and with a large soup ladle spoon the mixture over the duck 3 times over the breasts…2 times over the sides and 3 times over the back make sure all skin has been covered. Hang the duck back and leave overnight or for about 6 hours to dry again.) I left it on the balcony here because the temperature is just 2 degrees celcius just had to watch out for those sparrows..they eat anything and are very couragous ..they just hop into the kitchen….(soon a new recipe coming smoked sparrow stew ) 🙂

The next day preheat oven to 200 celcius ,place the duck on a roasting rack breast sideup with a dripping tray underneath with a layer of water in it.
Roast for about 30 minutes reduce heat to about 170 celcius and cook for another 30 minutes then increase again to 200 celcius and cook for another 20 minutes.just check if the skin does not get to dark ..at this stage it goes fast because of the sugar in the coating mixture.

Take out of the oven and let rest for 10 minutes, take out the metal skewer and tilt the duck so the liquid runs out. With a sharp cleaver cut the duck in half (messy and greasy..but stop whing it will be worth it) then chop into nice serving pieces,cut clean and straight through  the bone.
Ready to serve, Hope you try it and will enjoy, if you dont I am here and you are there and thats all there is :..-)

Now for the egg fried rice….to be honest I am too lazy now to write out a recipe so here is a link to one… 🙂

By the way if you can get it ..the best duck for this is of course the Pekin duck