People are made of places…

People are made of places. They carry with them
hints of jungles or mountains, a tropic grace
or the cool eyes of sea gazers. Atmosphere of cities
how different drops from them, like the smell of smog
or the almost-not-smell of tulips in the spring,
nature tidily plotted with a guidebook;
or the smell of work, glue factories maybe,
chromium-plated offices; smell of subways
crowded at rush hours.

Where I come from, people
carry woods in their minds, acres of pine woods;
blueberry patches in the burned-out bush;
wooden farmhouses, old, in need of paint,
with yards where hens and chickens circle about,
clucking aimlessly; battered schoolhouses
behind which violets grow. Spring and winter
are the mind’s chief seasons: ice and the breaking of ice.

A door in the mind blows open, and there blows
a frosty wind from fields of snow.

I found that love, provides
The key-unlocks, the heart and souls, of you and me-
Love will learn to sing your song,
Love is written in the stone

Every man, I meet is walking time-
Free to wander, past his conscious mind,
Love will come, and take you home-
Love is written, in the stone
Do you believe, my friend, in what you claim, people of the world,
All doubt the same-bringing questions
Of their own-truth is written,
In the stone

In the stone, you’ll find the meaning
Why you’re not standing tall
In the stone
The light is shining, forever touching all-

Life experience a passing day
Time will witness, what the ole
Folks say-getting stronger every day
-Strenght is written in the stone-
Deep inside, our hearts for us
To keep-lies a spark of light that
Never sleeps
The greatest, you’ve ever known-
Yea is written-
In the stone

In the stone, you’ll find the meaning
Why you’re not standing tall
In the stone
The light is shining, forever touching all
Never, never my darling, never you’ll
Be alone-Forever, ever my darling
True love is written in the stone

Sukhi’s sculptures are intended to bridge the cultures of East and West. Embodying the peace and compositional balance of ancient devotional art, they represent complex philosophical ideas with a simplicity and clarity that renders them accessible to the Western viewer. Exploring themes of hidden potentials, and the transcendence of our limiting view of a solid reality, her work often represents the negative space as being as important as the material itself, implying the dance of form and spirit, a constant state of transformation.

Oshibe mean “stamen” in Japanese, and was what inspired Tomomi Sayuda to create this nest/music box/lamp/creative plaything. Also inspired by eggs, plants, light, and the moon, Sayuda created an interactive sculpture for both children and adults. When you place the eggs on the stamens, the eggs light up and music is played. Each stamen plays a different sound, and the sounds change according to the number and position of the eggs.

I have been working primarily on creating miniature environments where imaginary beings evolve, devolve, consume, excrete, multiply and decay.

r r i a gglsssrrstv 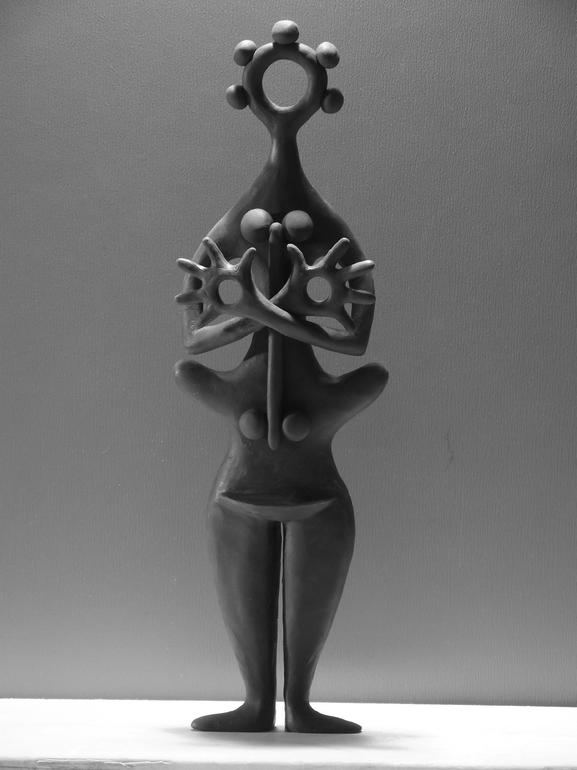 Elegant traceries of the far spheres
Orbit gently throughout soft black.
A violet band opens clearly on the horizon
To look closely through eyes bright and long.
Take solace in fear, hoping power
Shapes fortunate in the far sky.
At night, plunging deeply beyond
Vivid, chromatic sanctuary, the stars
Dust brightly my eyes, my chest,
Beating heart bearing the ends
Of all things, both ecstatic and suffering.
Evening evokes the eternal solitude
Of long light at the moment of perception.
The feathers of ritual, white, perpetual,
Rippling on the brows of dancing figures,
Take torturous turnings and visual burnings –
Fire, livid, seminal, beatific to
The core of fear, tastes slowly
A finely laid, consumable perfection.

Taiwanese designer hsia-ying lin has worked together with craft artisan jun-ching tang on
‘moon rabbit’ cup and plate. made from black clay, these tableware pieces interpret the famous
chinese fairytale of the rabbit on the moon, commemorated every autumn in taiwan during
the moon festival celebrations. lin and tang have designed a cup in which the rabbit sips
the water within along the lip of the vessel; and a plate where a rabbit is found sitting on its edge,
its stretched ‘reflection’ becoming the dish itself.

Grandpa Rabbit, or “Tu Yer” in Chinese, is a clay rabbit figurine said to be modeled after the legendary Jade Rabbit pounding medicine on the moon. It’s an age-old folk toy and a mascot in Beijing.

According to legend, once, a plague wrecked havoc on the city of Beijing. Almost every family was affected and nothing seemed effective in curing the disease. Seeing that people in the human world were desperately praying for treatment, Goddess Chang’e on the moon felt really sad. She sent Jade Rabbit to the moral world on a mission to drive the plague away. When she arrived in the City of Beijing, the Jade Rabbit visited one family after another, curing a lot of people.

In return for her kindness, people recovered from the disease vied with each other in giving her some gifts, but Jade Rabbit declined them all. Instead, she borrowed some clothes to wear. As a result, wherever she went, she changed her clothes. Sometimes, she dressed like a man and sometimes a woman. Her mission took her to all parts of Beijing. After driving the plague away, Jade Rabbit returned to the moon, leaving a beautiful memory in the hearts of Beijing people. To commemorate Jade Rabbit, local people made clay figurines of her. On the 15th day of every lunar August, every family would worship Jade Rabbit by presenting juicy melons, fruits and delicious vegetables and beans as a way of showing thanks to her for the happiness and auspiciousness she brought to the human world. Jade Rabbit was affectionately called “Grandpa Rabbit” or “Grandma Rabbit”.

Legends aside, the emergence of Grandpa Rabbit actually originated from the worship of the Moon Goddess and the firm belief in mythology. The legends about the moon also played an important role. The mythical tale about a rabbit on the moon first appeared in the Sping and Autumn Period. Among the general public, the rule of “woman worshiping the Moon Goddess and men worshiping the Kitchen God” were widely followed. So, the moon-worshipping rituals were mostly carried out by women. Children are fond of mimicking their mother, and that’s where the image of Grandpa Rabbit designed for children’s mock rituals came in. After buying a Grandpa Rabbit home, kids would perform the ritual like adults. Among the Yangliuqing woodblock New Year paintings created during Qianlong Period of the Qing Dynasty, there was a painting entitled the Moon Rising above Laurel Trees, bringing to life the scene of kids worshipping Grandpa Rabbit.

Since Grandpa Rabbit were exclusively used by kids, it naturally functioned more or less like a toy. After the worshiping ritual, Grandpa Rabbit became a toy for children. To add more fun, Grandpa Rabbit figurines with strings to move the arms were created. At the same time, there were a host of other rabbit toys hitting the market, such as “Rabbit Mountain”, a toy featuring a rock mountain and a group of rabbits in various postures holding different musical instruments, as if playing music at a grand ceremony. Another interesting toy was a movable small rabbit. Due to the spring fitted to the bottom, the rabbit swings and shakes hard when slightly touched, giving a lot of fun. What’s also worth mentioning was “Grandma Rabbit”, presumably the “wife” of Grandpa Rabbit. It’s a figurine of an old lady and was put alongside Grandpa Rabbit for worshipping. In Jinan of Shandong, there was a popular toy called “Rabbit King”. It’s a clay figurine of a rabbit head and a human body in the posture of pounding medicine, with both arms holding the pestle.

The one below could be my favourite… Art, movement and music all together 🙂

The Rosary, a long formulaic concatenation of various prayers, is the go-to prayer for Catholics in need. It’s not my intent to mock or demean it in any way but, honestly, I find it a bit tedious. It’s a process simply begging to be automated.

Dragonfly made from matchsticks….

Chicken made from eggshells….

Leo Sewell grew up near a dump. He has played with junk now for fifty years and has developed his own assemblage technique. His works are collected by corporations, museums and individuals throughout the world. Leo continues to cull the refuse of Philadelphia out of which he fashions pieces of all sizes, from a lifesize housecat to a 40 foot installation.

His sculptures are composed of recognizable objects of plastic, metal and wood. These objects are chosen for their color, shape, texture, durability and patina; then they are assembled using nails, bolts, and screws. The outdoor sculptures are constructed of stainless steel, brass, or aluminum found objects which are welded together.